At the last annual general meeting the announcement sounded almost randomly: “For the coming year we are planning another excursion to Mr. Fricker.“ The reactions were mixed. Who was still fairly new in the club had a rather questioning look at others. But especially those who’d been there once before pictured in their mind’s eye creations of anticipation. The name Fricker means a high-quality collection of old weapons and armor mainly housed in a beautiful historic building that evokes wonder in itself provoking jealousy among lovers.

The eternal attraction of the blade… 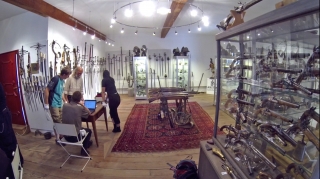 At Hornhardt there is a feature which arouses a remarkably interest to us. In contrast to ordinary museum collections in which the craftsmanship is isolated behind glass and presented at distance, Fricker’s pieces are generally for sale and therefore accessible not only to the eyes but additionally to the hands. Touching and – for us as fencer – limited experimentation is allowed! Mr. Fricker is not just a collector and sworn expert on historical weapons, but far more a professional trader on this field. Already for the third time a small group of Zornhau was allowed to do what is usually reserved for his paying customers: to enter the hallowed halls, to take the swords, knives, halberds and the other evidences of this past military art from the wall and out of the vitrines in the – of course gloved – hands.

Whereas his usual customers are more interested in the value of the collection pieces, we are enamored by the technical details. It is our aim to measure out the weapons, capture the weight, length, shape, and many other details in tables and photographically. The purpose of this work is to provide historical fencers and manufacturers of weapons replicas useful values with which they can optimize their training equipment. By now there is already a small number of pieces in the historical scene which are very closely related to the data sheets of the first two trips. At the end of August the time had come.

A guest of the lord of the castle 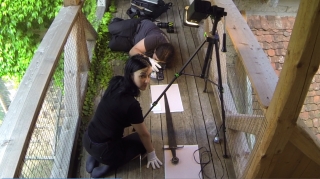 A team of 10 people came together to form the three groups: sword, knife and pole arms plus a photo team to scan all weapons. The organizer Torsten Schneyer supervised the initiation with his movie camera (see YouTube documentary). At the beginning, however, we discovered that Mr. Fricker had moved. His beautiful historical fortified tower we visited during our last excursion in Dinkelsbuhl turned out to be a way too small. In old medieval tradition he improved from a tower to a castle or rather a palace. This time the tour goes to the castle in Honhardt at Frankenhardt. By now it would be easy to get bogged down in details of the castle, which already represents a gem itself. But we have to restrict ourselves to this statement: Quite a few participants would immediately move into this place if there would be a chance. Thereafter, at a measured step the savage horde started to storm these hallowed halls. On two floors armor, pole arms, swords, knives and various other pieces of jewelry were strung together. The majority dates back to the militant sector.

The agony of choice

The first step was an initial orientation to organize the teams and to seek out the objects of desire. But the choice was more than difficult. What would be more interesting? – More versions of the same model or an overview of different types? The selection is way too large to take a closer look on even a fraction of all these jewels. 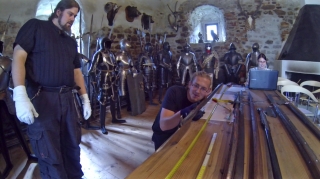 It wasn’t that easy: Six different pole arms had been examined by the corresponding group of short-and long war hammers. They seemed massive compared to the almost delicate Roßschinder. Alexander Klenner and his men were in their element facing unexpected challenges: How can you describe in detail very creative three-dimensional shapes with simple words? How to record all different characteristics as clear as possible in a table? And where is the „front“ (not „up“) of a war hammer? Is it possible that the good piece just truly overstrained the scale??? Especially interesting are the original painted shafts of the weapons, which were often painted in heraldic colors.

On a knives edge

Five knives went through the hands of the „knife-group“; from the early and comparatively seldom Malchus up to the big knives of 16 century. Once again it becomes clear that the typological classification is a great art: Thanks to little nuanced features, apparently classic long knives of traditional fencing turn out be hunting weapons. And it’s easy to spend to discuss whether the broad, richly decorated Renaissance knife actually represents a Dussack or an early baroque saber.

A few heretical thoughts about swords 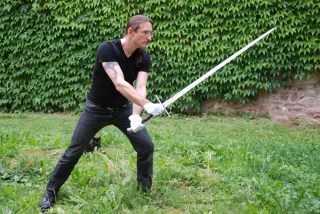 Four new swords joined our measured pieces of the previous excursions: beautiful one-handed longswords and even an armor-piercing sword. It’s unbelievable: Especially the sword fencing has undergone a rapid change in the HEMA scene, although this weapon is actually best explored in terms of fencing. This is perhaps down to the fact that abroad a new trend has emerged – The tournament fencing with a „Federschwert“. As more historical fencers train on tournament wins, they tend to use the Federschwert not only for free-fighting („sparring“) but also for the technical training and even for video demonstrations. This one-sided focus on extra light Federschwert-blades leads to a sport degraded fencing, which is simply trimmed to speed the fencing style that would be impossible to prove with the ‘real’ fencing. Torsten Schneyer feels vindicated in this controversial opinion after evaluating the measurements of the historical weapons: In all his time not one of the studied long swords reached the length-weight ratio of modern sport blades Even this time, the average of all measured weapons was heavier than modern steel simulators.

The one-handed swords behave the same: For example the Castillon-handed sword with the Zornhau marking ZEF-3-SW-1 (Let it be understood: very sharp, pointed, and obviously used regarding the nicking) weighs almost 1,700 grams. These are almost 400 grams more than a two-handed Hanwei Feder! Nevertheless, this weapon corresponds very closely to the proportions of the one-handed sword (pictured at I33) and thanks to its balance it’s indeed trainable. Of course, medieval swords are still not comparable to the heavy clubs from of the knight movies. Actually they are trainable and highly functional. But likewise they are heavier and therefore „slower“ than some HEMA-tournament fencer might think. We emphasize again, that these results are no coincidence but a general observation. We leave it to the reader to draw his own conclusions during his training! 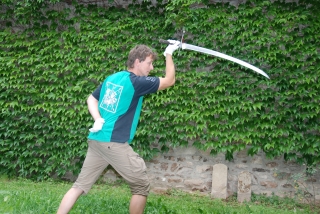 What followed were hours of measurements, photos, astonishment, and often surprises. In the meantime, there were short video interviews with a representative of each team who demonstrated with one or two of his favorite pieces. After an emotionally too scant time, the data sheets and photographs were completed. Although the last hours were exhausting, we quickly took a few more photos of some interesting pieces which couldn’t make it in our measurement in time. Thereafter we packed up and said goodbye and thanks again to Mr. Fricker. After a surprisingly delicious meal at a nearby pub, the evening ended in a hostel at castle Rechenberg, an interesting historical ruin too. But this is another story. The next day Zornhau returned to Mr. Fricker for an extensive interview. This time we’ve got a deep view into his work as a collector and he introduced us some selected weapons in detail.

The actual work began after our return journey. Our data material had to be processed and evaluated. We begin now with the release of our movie dokumentation in wich we give you some insights into the work of a professional historical weapon trader and our domuntation project.

Furthermore we start a series of articles called „original of the week“, beginning with a wonderfull sword labelled with „ZEF-3-SW1“ (stands for „Zornhau-exkursion 3, sword 1“). Each week we will present you a new data sheet and a righ resolution picture.  We wish you much fun with our material and our movie.